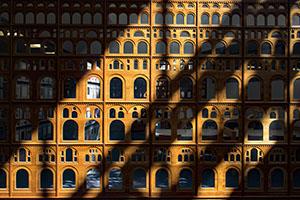 “Recolecciones” is Spanish for “recollections” —
as in memories. It also means “harvests” or “gatherings.”
The Latin root, “lect,” means both “to read” and “to gather.”
The ancient Romans envisioned reading
as a process of gathering up scattered
bits of information and combining them
into meaningful sequences.
Readers are thus gatherers and harvesters.
The library is a place where people come together
to recall and reformulate their common heritage,
a place for “re-col-lect-ion.”

As part of the City's ongoing commitment to the arts, the San José Public Art Program commissioned artist Mel Chin to create artwork that would be integrated into the new Dr. Martin Luther King, Jr. Library. The 34 artworks, located throughout the library, are designed to pay homage to the Library's book collections. These sculptural insertions are designed to provoke your interest and curiosity, encouraging exploration and circulation throughout the Library. All of the artworks are intended to surprise you and add to your sense of mystery and wonder. They are site-specific, their adjacency imbuing the piece with additional layers of meaning. 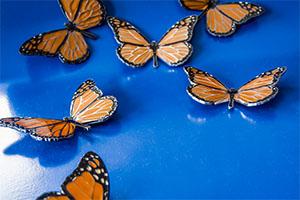 The Recolecciones artworks vary from large, dramatic statements to intimate, subtle insertions that may require numerous visits to discover. The artworks include functional installations such as chairs, tables, and shelves, as well as wall paneling, sculptural ceilings, curious light projections, and more traditional formal sculpture. Some of the concepts are invested with a sense of humor, while others are designed to encourage contemplation.

At the very least, we hope these works delight you. 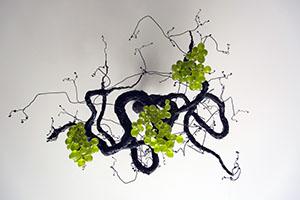 Mel Chin is an internationally recognized artist, known for creating artworks in a broad range of media and scale, including objects, temporary installations, and permanent public artworks. Since the 1970s, Mel Chin has produced artworks that combine cross-cultural aesthetics with complex ideas, including art that addresses political and ecological issues. Mel Chin's artistic process is highly collaborative in nature; he has worked with biologists, psychologists, geologists, medical doctors, and television producers.

Mel Chin's methodology also involves an extensive process of community consultation and participation. Through collaborative community forums, the artists facilitated discussions on a wide spectrum of personal and civic issues that served to inspire the artwork concepts for Recolecciones. In some cases, artworks are the implemented form of creative concepts delivered by talented students from San José State University and The Cooper Union for the Advancement of Science and Art in New York City. These discussions involved participants who voiced multiple points of view and exhibited a diverse range of race, age, and socio-economic background.

View a brochure about the artworks in Recolecciones [PDF]